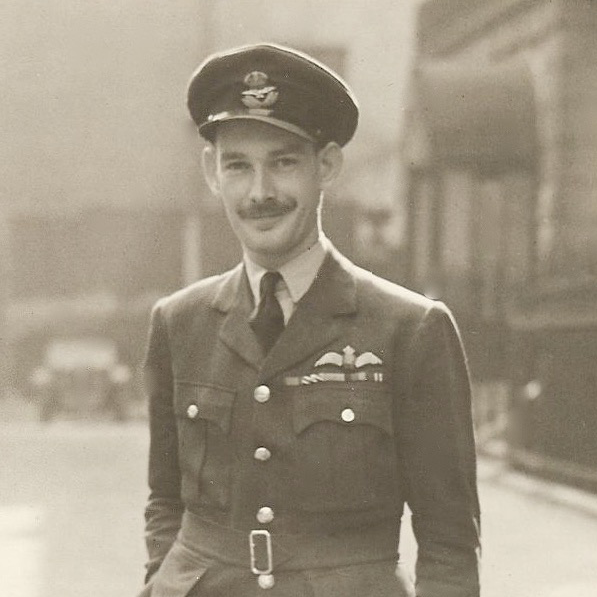 John Wooldridge was born in Yokohoma, Japan on July 18, 1919. Educated at St. Paul’s School, London, his first job was as secretary to a boys’ preparatory school in Norfolk. All his spare time was spent flying with the Royal Air Force Volunteer Reserve and studying music.

In April 1938 Wooldridge transferred to the regular Air Force as a Sergeant Pilot, getting past the age of admission rule by claiming that he was born in 1917. He took part in the British air raid on Kiel in  September 1939, the first raid of World War II, and having brought his damaged aircraft home safely was awarded the Distinguished Flying Medal. Commissioned in August 1940, he rapidly rose to the rank of Flight Commander, flying Lancasters as a Flight Lieutenant. In the middle of 1942, for his part in the 1,000 bomber raid on Cologne, he was awarded the Distinguished Flying Cross.

Wooldridge was often filmed in documentaries as a representative of the RAF. He served with No. 106 Squadron as one of Guy Gibson's Flight Commanders, before being appointed commanding officer of No. 105 Squadron, which specialised in low-level precision daylight bombing using de Havilland Mosquito aircraft. In early 1943 he received the Bar to his Distinguished Flying Cross, having defied the appalling attrition statistics, and completed the 80th of his ultimate total of 97 successful missions. Wooldridge was invalided out of the RAF in October 1945, owing to injuries suffered earlier in war. Bombing landing barges at Calais for three successive nights early in 1940, he was wounded when an A.A. shell burst in the cockpit of his aeroplane. After being demobilised he became even more active as a composer and author; his book Low Attack (1944) describing his low-level bombing exploits.

During the first three years of the war, working alternately on borrowed pianos and the local padre’s organ, he wrote his first and most notable musical work — a symphonic poem named The Constellations (1944). Much of this was sketched during the long bombing missions over occupied mainland Europe. When Wooldridge went to America to acquaint the U.S. Service Chiefs of British plans for PLUTO and FIDO, he took with him the score of The Constellations which was premiered by the New York Philharmonic Orchestra, conducted by Artur Rodzinski (its UK premiere was given by John Barbirolli and the Hallé Orchestra). Wooldridge returned to the US in November 1944, by invitation and with special permission from the RAF, to attend several British concerts. 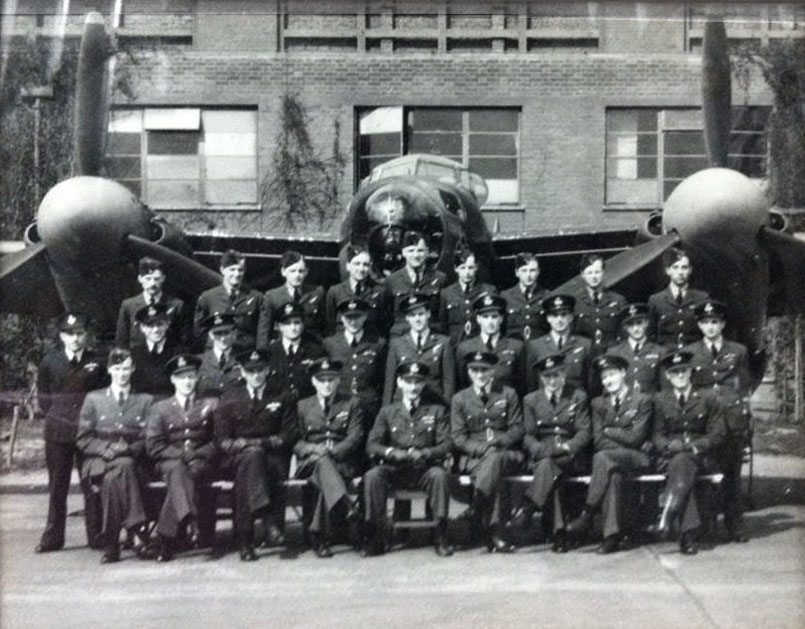 Rodzinski had made a bargain with Wooldridge during his first visit to New York, when he had conducted The Constellations. He told Wooldridge that if he shot down more than five enemy planes during the coming six months he would premiere another Wooldridge work with the NYPO. 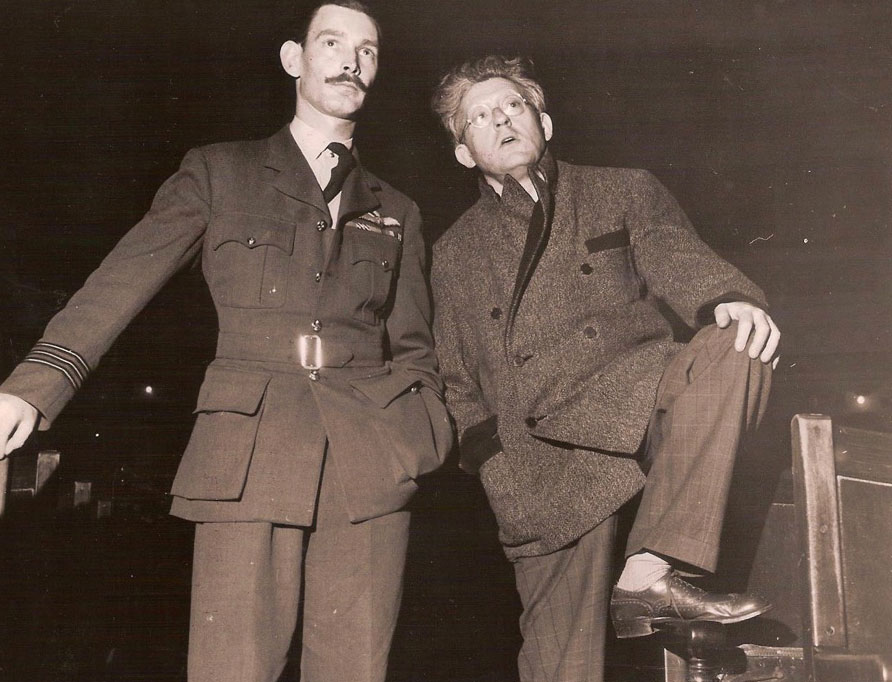 Wooldridge more than met this quota and, true to his word, Rodzinski premiered A Solemn Hymn To Victory in a concert alongside Walton’s Belshazzar’s Feast and Ralph Vaughan Williams’s Symphony No. 5. The Constellations is an orchestral piece and is "Dedicated to my comrades. Composed on the eve of The Invasion. June 1944." Wooldridge’s presence at the premiere was no mean feat in those wartime days, but on the homeward journey from his first visit, and flying a Mosquito, Wooldridge broke the Atlantic world speed record.

After the war Wooldridge devoted himself chiefly to the composition of film music, working a great deal with de Wolfe Ltd. He was much associated with the films of John and Roy Boulting (the Boulting Brothers), having been put under contract to write music for Fame Is The Spur and The Guinea Pig (which starred a young Richard Attenborough).

He wrote both music and script for Appointment in London (1953), the definitive film about Bomber Command, starring Dirk Bogarde and Dinah Sheridan.

Wooldridge also composed for the theatre, with his music featuring in the Michael Redgrave / Michael Benthall production of The Tempest at The Memorial Theatre, Stratford. He also provided incidental music for productions at The Open Air Theatre, Regent’s Park, directed by Robert Atkins.

Not content with writing music he was also active as an author, writing scripts for the films Appointment In London, The Man Who Hated War, The Pride Of Spenwiddy, and Sandric Is Dead, as well as the plays Three Steps To Heaven and Life With The Girls, which both made their London debuts in the mid-1950's.

The Elizabethans, a Symphonic suite written by Wooldridge in 1952, was dedicated to Her Majesty Queen Elizabeth II. The manuscript bears the inscription: "By one who having for a long time imagined himself an Elizabethan, now finds himself one in his own right." Following its Sydney premiere, it received a distinguished USA premiere by Leopold Stokowski and The Houston Symphony Orchestra (1960), with Wooldridge's celebrity as both a bomber pilot and composer securing him a very high profile on the other side of the Atlantic.

Another of his more famous compositions was the Slow March For The Royal Air Force. This was played at the unveiling and dedication of the Royal Air Force Memorial, Runnymede, and was chosen to play at the funerals of both Air Marshall Sir John Slessor and Prime Minister Sir Winston Churchill.

A number of famous soloists showed practical interest in Wooldridge's music, thanks in part to his connections with Meyer de Wolfe. He wrote an Oboe Concerto for Leon Goossens, which was later  recorded in Holland where it was performed by the Concertgebouw Orchestra. His Cello Concerto was written for Maurice Eisenburg.

His The Saga Of The Ships was performed by the Sheffield Philarmonic Orchestra, conducted by Herman Lindans. The work is "Dedicated with his permission to the Right Honourable Winston Churchill - in honour of his distinguished associations with the men of the sea.", but had been written for his wife Margaretta Scott (1912-2005) who gave the first performance.  Away from composing, his musical activities included work as an orchestral conductor with the Philharmonia Orchestra.

As a man standing 6 foot tall and 150 pounds, with brown hair, blue eyes, and sporting a 'Bomber Command' moustache Wooldridge struck a commanding figure. There was nothing of the affected artiste in him, describing himself as "an ordinary chap". He married the actress Margaretta Scott in 1944 and they became parents to Susan and Hugh Wooldridge. He died on October 27, 1958, in a car accident.